The War on Judaism and Evangelicalism: "Christians United For Peace" (aka "CUFP")

(And, the making of a radical anti-Semite in pursuit of the next Holocaust)


I.    What is "Christians United For Peace" (aka "CUFP")?
II.   CUFP Hate and Incitement Against Jews, Judaism and Israel
III.  CUFP's War on Evangelical and Southern Baptist Christianity
IV.  The New Blood Libels
V.   Who Is CUFP?

CUFP claims to be concerned activists for Palestinian human and collective rights, and for enlightening and "changing the face of" Evangelical Christians with respect Israel and Jews.  CUFP claims to be a response and challenge to Christians United For Israel ("CUFI"), an organization having more than 1 million members expressing their solidarity with Jews and support of Israel.


However, CUFP's claims are a ruse, and they are merely cloaking themselves as do-gooders and peaceful welcomers of all. With virtually every post, CUFP leaves its official story far behind.

Whether within individual posts or threads, or by cumulative effect and weaving between the lines, CUFP sows and incites:

CUFP's ideology and propaganda simply leave no middle ground and only hellish aftereffects.

A.  Outright Incitement of Anti-Semitism

Routinely reposted by CUFP (this one on February 16, 2014), the alarming red background is meant to attract wide attention and to engrave its message deep into the minds of its viewers.

The overall intention of the post, including the message within the message, is clear:

Push your hatred of Jews, Judaism and Israel to--or even over--the EDGE

Other recurring CUFP themes in this post include: Poking fun at Jews' fears of Adolf Hitler and berating pro-Israel Christians.


B.  Distortion and Exaggeration

Not even Gaza's Hamas terrorist regime and media fabrication machine make such a claim.


In this CUFP Valentine's Day (2014) post, the reader is meant to believe Israel actually uses Palestinian children for experiments. This is no less than the blood libels upon which Jews have been persecuted and massacred for centuries.
And, what is the source of the linked "report"? The conspiracy theorist, "Before It's News"--which would be bad enough, but in this case, in reliance on one of the most notorious ant-Semitic sites the world over: "Center for Research on Globalization" (www.globalresearch.ca),  home to routine Holocaust denial, Jewish world domination theory, and Jewish satanic theory.

Other sources cited--as gospel truth--by CUFP include Jeff Rense (www.rense.com), a propagator of Andrew Hitchcock's insidious "Synagogue of Satan/The History of the House of Rothschild" (http://rense.com/general88/hist.htm) and Iran's own "PressTV."

Norman Finkelstein, infamous Holocaust denier, over which he lost university employment as a professor, and even he deemed himself "unemployable."


E.  Cloaking Anti-Semitism with "Anti-Zionism," and with Anti-"Talmudic" and Anti-R"abbinical" Judaism

In addition to "Zionist" Jews, CUFP tries to deceive its readers that its repugnance is limited to "Talmudic" and "Rabbinical" Jews and Judaism. In this regard, CUFP thoroughly distorts the text and context of the Talmud and the teachings of Rabbis.


But,  these "Talmudic" and "Rabbinical" distinctions do not even exist within the Jewish faith or among Jews. The "Talmudic Jews/Judaism" and "Rabbinical Jews/Judaism" labels actually were created by certain Evangelical and Messianic Christian denominations (ironically, ones which are very pro-Israel), but exploited by anti-Semites to conceal their hatred of all Jews and all of Judaism.

F.  CUFP Unleashed: It's Judaism Itself, All of It; It's the Jews, All of Them

But, CUFP can't run from its through-and-through anti-Semitism and hatred of "all" Jews, much less hide.  In a post of January 26, 2014, CUFP acknowledges, "I'm to the point of bashing all Jews..."  CUFP goes further here and below (i) to question and mock the concept of Judaism and very existence of Jews by the context and quotation marks surrounding "the Jews" (and, at that, twice) and "religion" (below), (ii) to invoke the age-old Jewish world domination libel, and (iii) to blame Jews for instigating Muslims to massacre Christians.

Here, CUFP doubles-down to clarify that it's not just Zionist (pro-Israel) Jews, or even anti-Zionist Jews: IT'S THE WHOLE JEWISH RELIGION!  To wit:

"You can pretend it's not the Jewish religion, but it most certainly is the religion."

"... your 'religion' has emotionally blackmailed the world ..."

CUFP:  "I don't respect what I've discovered about Judaism."--ALL OF JUDAISM!

"No Jews seem to be willing to discuss the reality that their religion and culture has two faces -- one of them deceives, the other teaches supremacy."

G.  In Fact, Judaism and Jews Are Just Plain Evil

CUFP:  "There is nothing sacred about 'the Jews'--they've set up their own mythical criteria that is anti-God, rogue, lawless, supremacist evil."

Note also "the Jews" (in quotation marks) = questioning and mocking the very existence of the entire Jewish religion.

And, "they've setup their own mythical criteria" = not "Talmudic Judaism";  not "Rabbinical Judaism"; but,  ALL Judaism.

H.  The CUFP Solution:  Kick Judaism "to the Gutter"

I.  Differences of Opinion (and Facts) Not Allowed

To complete the un-rounding of the CUFP environment, CUFP deletes opposing facts and opinions, even if verifiable, presented respectfully or sourced from CUFP's own approved sources, and permanently blocks their contributors.  This report by the Palestinian Authority's own Independent Commission for Human Rights was deleted and its poster blocked by CUFP simply because evidence of widespread brutality committed by the Palestinian and Gazan governments does not fit CUFP's meme: http://www.ichr.ps/en/2/5/1150/January-2014-Report-of-Human-Rights-Violations-January-2014-Report-of-Human-Rights-Violations.htm?d=2014


CUFP mocks and and outright questions the Christian faith of Christians who simply would dare to be pro-Israel, notably Evangelical Christians such as those who follow globally-renowned Pastor John Hagee, who CUFP goes on to describe as a "swindler."


B.  Tearing Christians and Jews Apart

In this post, CUFP insists that Israel is "planning how to wipe you [Christians] out of existence" and engaged in the "destruction of our [Christian] faith."

CUFP: "We are Christians who reject Judeo-Christianity."

CUFP: "Zionism is a complete denial of Jesus."

A.  Christian Libel:  Jewish "Enslavement" of Evangelical and Southern Baptist Christians (including by "Zionist infiltration into Christianity" and "the [H]olocaust industry")

B.  Demonization and Government Libels:  Judaism Is Evil; Israel Has Seized Control of the U.S. Government

C.  9/11 Libels:  Jews and Israel Perpetrated the 9/11 Attacks; Jews and Israel Seized Control of America on 9/11 to Turn it Into a Nazi-Like Fascist State In the Name of Israel

(don't they all put on that baby-loving image ...)

Ms. Jones-Owens obtained a B.S. degree in Elementary Education from the University of West Georgia (UWG) (located in Carrollton, GA) in 1978; from 1978 - 1998, held various teaching positions in public and private primary schools in Coweta County; obtained a M.Ed. in Media in 1997 from UWG; and, from 1999 - 2010, taught media and introductory instructional technology classes at UWG. 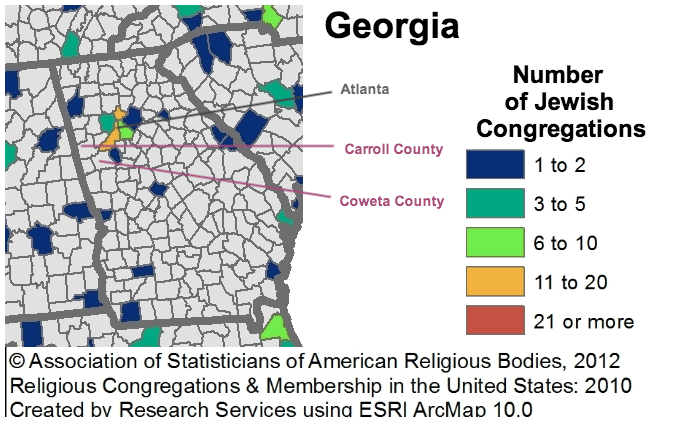 According to the latest U.S. Religion Census: Religious Congregation and Membership Study (2010), there is not a single Jewish congregation in either Carroll County or Coweta County.  Of the 12 counties that border Carroll and Coweta counties, only 2 of them have Jewish congregations.  Furthermore, there isn't a college with a Hillel (Jewish life services) chapter within a 50-mile radius of UWG, much less at UWG itself.  It stands to reason that Ms. Jones-Owens has never been a part of a community or environment with any practicing Jews, and has had no routine interaction with them.

In fact, Darlene Jones-Owens has admitted just as much:

While this is surely the case for many, many people in the United States and elsewhere, it is Ms. Jones-Owens who is claiming the mantle of expertise--and judgment--on the Jews.


According to Coweta County court records, after 21 years of marriage, in 1999, Darlene Jones-Owens was sued by her now-ex-husband for divorce.  The couple was divorced in 2000, but the proceedings, including numerous motions and rulings for restraining orders and contempt, lasted another 7 years. Ms. Jones-Owens' ex-husband has been happily remarried since 2005, and still resides in Newnan, Georgia.


Ms. Jones-Owens claims that she was "brought up in a Southern Baptist Church" and effectively as a "Christian Zionist" her whole life--until about 2010/2011, "[a]fter deep research, many months of struggle and prayer," she set out on a mission to "change the face of Christianity" away from its positive and friendly views toward Israel and Judaism.

Ms. Jones-Owens' "struggle" likely consists of far more than her self-described religious reorientation: In the same period of time, the global economy collapsed, Ms. Jones-Owens lost her job with UWG, and she appears to have experienced accelerated aging and weight gain (no information has been obtained as to whether these change were the result of natural aging, or physical or mental illness and associated treatments).

Stops on Ms. Jones-Owens's path from there include: 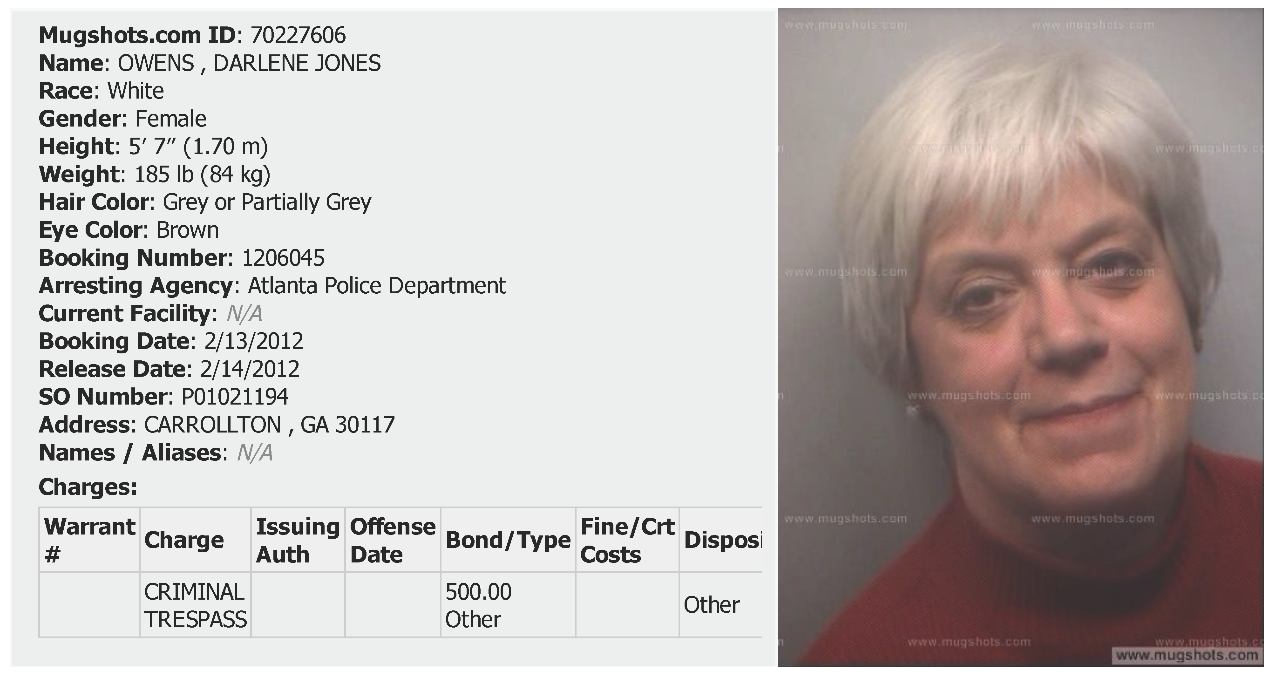 Darlene Jones-Owens joins "Kairos USA," an organization whose policies the Anti-Defamation League described as "a poison pill for Christian-Jewish relations." 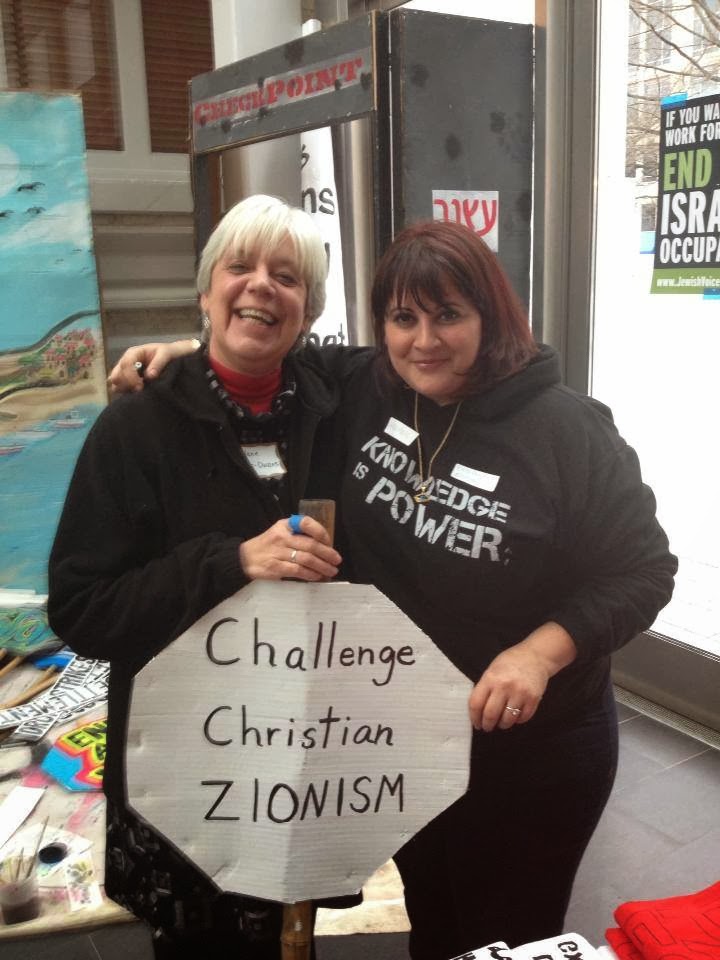 "Occupy"-style street advocacy, but against her new targets: Israel and Jews, and Christians who view them favorably.

Whatever the nature and degree of contributing factors, Darlene Jones-Owens radically transformed her beliefs, views, affiliations and conduct, including:

Ms. Jones-Owens' well-developed presentation, editing and "classroom" skills, and her background in instructional technology and techniques, now serve the most sinister of purposes in CUFP:

Stoking the flames of a new Holocaust ...